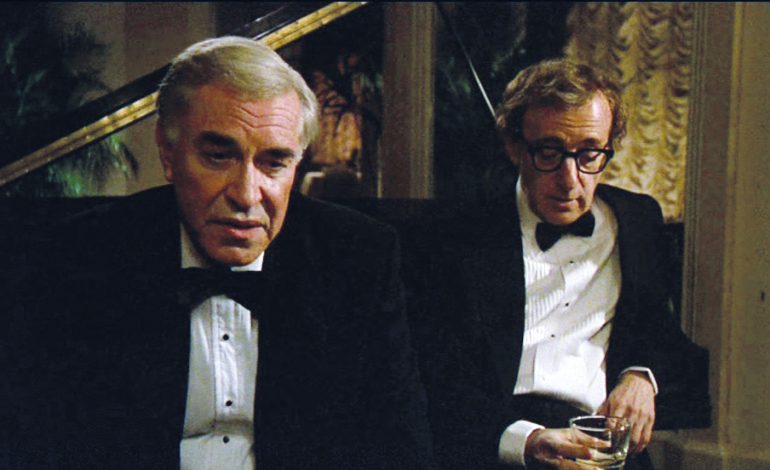 Judah (Martin Landau) would seem to have it all: wealth, success, a (seemingly) happy marriage, and the respect of his colleagues and community. Then, all is thrown into jeopardy: his mistress Dolores (Anjelica Huston) threatens to reveal their affair to his wife. In desperation, Judah consults two different men about what to do. Ben, a Rabbi, gives the predictable answer: Judah should confess everything to his wife and ask for forgiveness. But Jack, Judah’s brother, proposes a different solution: they will arrange for a man to ‘take care’ of Dolores. No one will ever find out, he promises. Judah is horrified by the suggestion. But he agrees.

It would seem like the beginning of a classic Hitchcockian cat-and-mouse thriller, ending with Judah’s inevitable exposure and apprehension. But Woody Allen has never been one to meet our expectations. Punishment does not follow crime. Judah evades capture and conscience so easily that the sheer effortlessness of his crime throws him into existential turmoil. In this way he—and we, the audience—are forced to confront the central question of the film: what does human responsibility mean in the absence of a higher power?

Dolores’ murder is all the more chilling because it is a crime of convenience, not passion. Judah justifies it by claiming he is protecting his wife Miriam from the truth; ‘She’ll be broken,’ he says. ‘She worships me.’ But it is of course Miriam’s idol of Judah that will be broken, not Miriam.[1] It is his reputation that is really at stake. That the threat to his public image comes in the form of a living person does not make it more personal. Certainly it would be easy, if somewhat misguided, to criticize the character of Dolores from a feminist standpoint; she is an exaggerated sexist stereotype, a hysterical woman who will stop at nothing to bully her lover into marriage. But to make Dolores a more sympathetic or nuanced character would undermine the central question of the film. ‘It’s a human life,’ insists the Rabbi, as Judah wrestles with whether or not to have his mistress killed. Yet even this plea reduces Dolores to an abstraction. She is not a person, but a problem. In the absence of empathy, the question that remains is a purely abstract one. Can Judah kill—not kill Dolores, just kill—to protect his reputation? The answer, he discovers, is yes, easily.

In this way, perhaps unwittingly, Allen introduces the rational choice theory of criminology, a utilitarian perspective that views the criminal as a rational actor, making decisions by weighing the costs and benefits of a criminal act and contrasting them with the possibility of apprehension and sentencing[2]. The issue here is not morality, but self-interest; according to rational choice theory, a crime needs only three conditions in order to occur: a suitable target, a motivated offender, and no authority to prevent the crime.

It is the third condition that Crimes and Misdemeanors is preoccupied with. Dolores is a suitable target and Judah is certainly motivated, but what about God? Judah, an optician, was taught by his religious father that ‘the eyes of God are on us always’. But if he kills Dolores and no punishment ensues, then his father must be wrong: the eyes of God are not watching us (or, if they are, they are watching helplessly like the huge disembodied eyes of Dr. T. J. Eckleburg in The Great Gatsby).[3] Indeed, vision is a recurring theme in the film. At one point in their courtship, Dolores asks Judah if the eyes are the windows of the soul; he dismisses the idea of a ‘soul’ as superstition. After the murder, he goes to her apartment and looks at her corpse. ‘There was nothing in behind her eyes,’ he later remembers. ‘When you looked into them all you saw was a black void.’ The confirmation of nothingness—no soul, no God, no higher moral order—throws him into angst and dread, classically recognized consequences, in existential theory, of the realization of one’s own unrestricted freedom. The theme of existential angst finds a parallel in the secondary plot of the movie, in which filmmaker Cliff (Woody Allen) struggles to make a documentary about an existentialist philosopher. The philosopher says: ‘It is only we, with our capacity to love, that give meaning to the indifferent universe.’ Does that mean that where there is no love, there is no meaning?

Interestingly, it is in this seemingly unrelated, comical ‘B plot’ that Allen gives us a counterpoint to Judah’s crisis and steers us away from outright nihilism. Unlike Judah, our secondary protagonist Cliff has nothing to lose: no money, a failing career, and a marriage so lifeless he and his wife can barely bother to argue, much less have sex. He grudgingly accepts an offer to direct a biography about successful and pretentious film director Lester, seeing it as an opportunity to fund his upcoming documentary. In the process, he falls in love with Lester’s production assistant Halley, wildly proposes marriage to her, and cuts together an unflattering film comparing Lester to Mussolini. He is fired, Halley opts to marry Lester instead, and the philosopher commits suicide, rendering all his efforts pointless.

On the surface, this story would seem to confirm Judah’s worst fears that fairness and justice are meaningless. However, at the end of the film, Judah and Cliff meet by chance at a party. The former narrates the story of Dolores’ murder to the latter as though it were merely an idea for a movie. Cliff says he doesn’t like the ending. ‘I would have him turn himself in,’ he says. ‘Then your story assumes tragic proportions because, in the absence of a God, he is forced to assume that responsibility himself. Then you have tragedy. 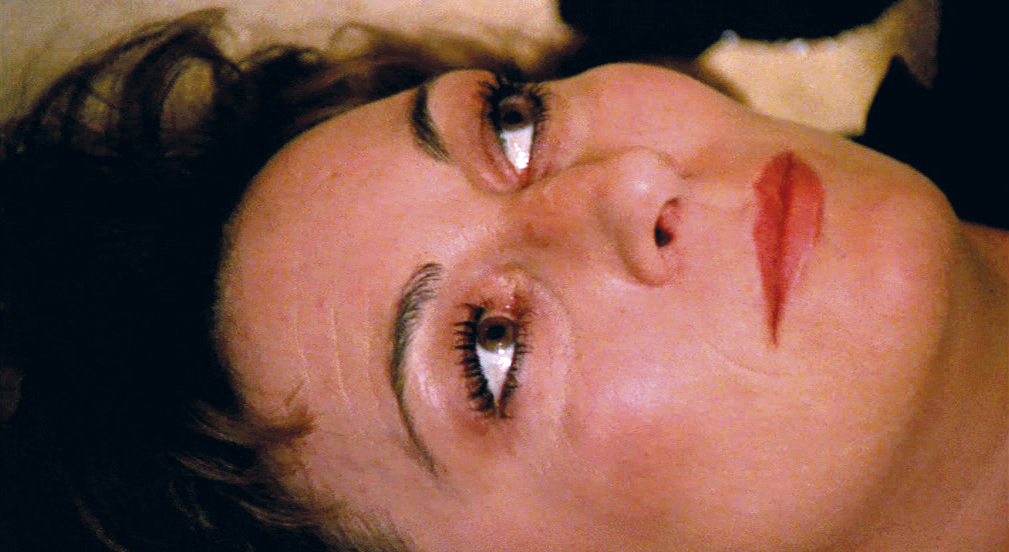 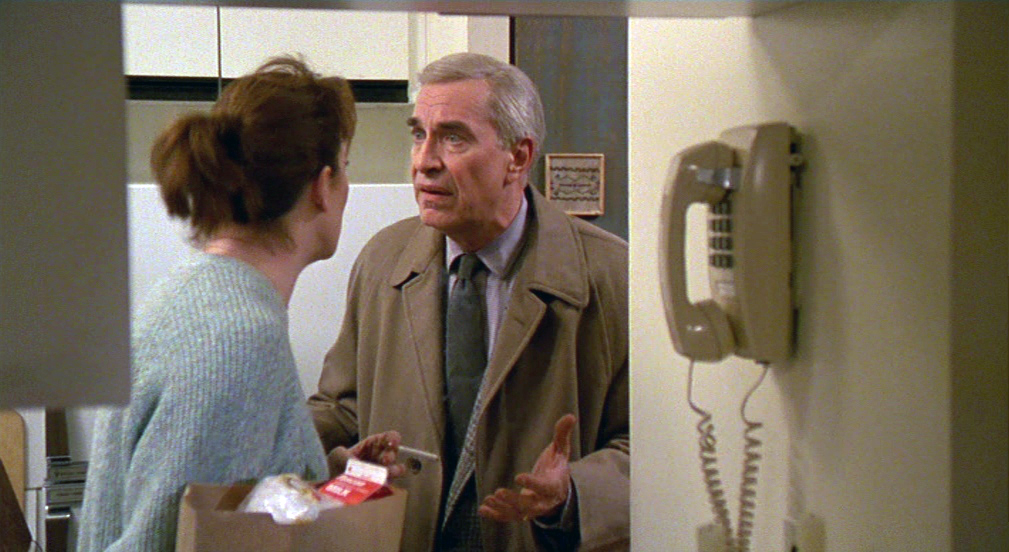 Cliff here is positioned in opposition to Judah, who lacks a basic capacity to introspect or assume personal responsibility.[4] For Cliff, the prospect of meaninglessness is not threatening simply because it not an option. A documentarian, he is all too willing to assume the gaze of God himself. Judah, of course, dismisses his proposed ending as ‘fiction’. ‘That’s the movies,’ he says. ‘You see too many movies. I’m talking about reality.’ And certainly the film seems to confirm that there is no reward for responsibility; Judah leaves the party with his loving wife, triumphant, while Cliff is left behind with nothing but his own convictions. The audience is left to decide for themselves which man is better off.

The philosopher concludes the film by saying, ‘We are, in fact, the sum total of our choices.’ Allen seems to be suggesting that, if the police will not intervene, the third condition of the rational choice theory of crime (that is, whether or not there is a higher moral authority) is actually up to the individual. It is he/she who, in deciding whether or not to act, confirms or denies his own beliefs. In other words, it is not the existence of a higher moral order that determines one’s actions, but one’s own actions that determine whether or not there is a higher moral order. Allen is suggesting that even without external constraints (accountability), one can still choose to act as though God’s Law were real (responsibility). However, he refuses to make the choice for us. Allen’s decision not to give us the tragic ending proposed by Cliff is a response to the age-old idea that art should (or can) morally educate.[5] None of Allen’s characters lead by moral example. Judah evades justice. Cliff ends up with nothing. The three tenets of the Hegelian Spirit are all massively undermined: the Rabbi is blind, the philosopher suicides, and the artist is utterly ineffectual.[6]

It’s a problem without a solution. By refusing to give his story a clear morale, Allen drops responsibility squarely in the lap of the viewer. Cliff’s commitment to ‘personal responsibility’ is ultimately pointless and self-destructive, while Judah, who evades justice easily, must still face the realization of his own worst beliefs: a world devoid of meaning and retribution, where any unscrupulous man can triumph. This is a world rarely depicted in Hollywood cinema, but not far away from the world we inhabit. Is it a tragedy? No, Allen tells us. It’s reality. 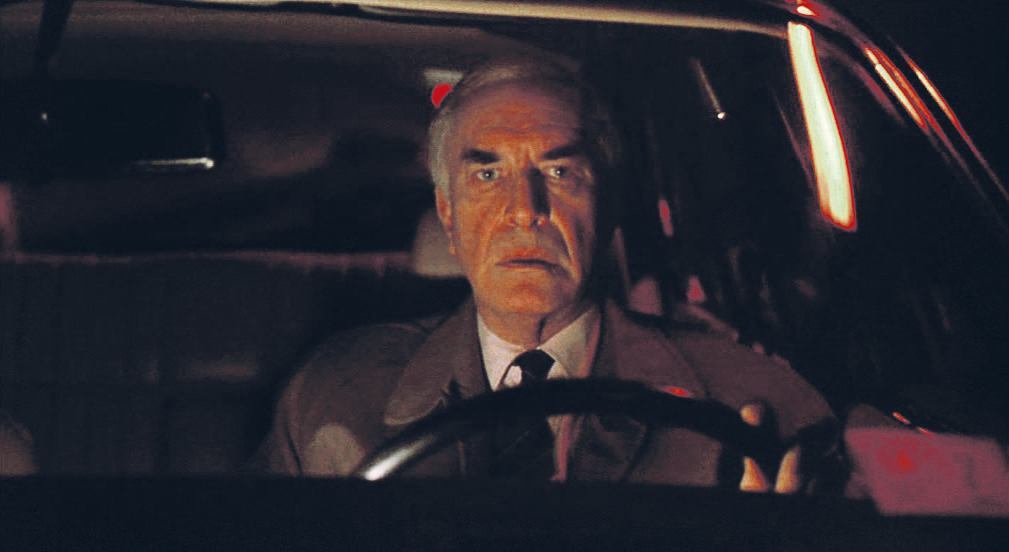 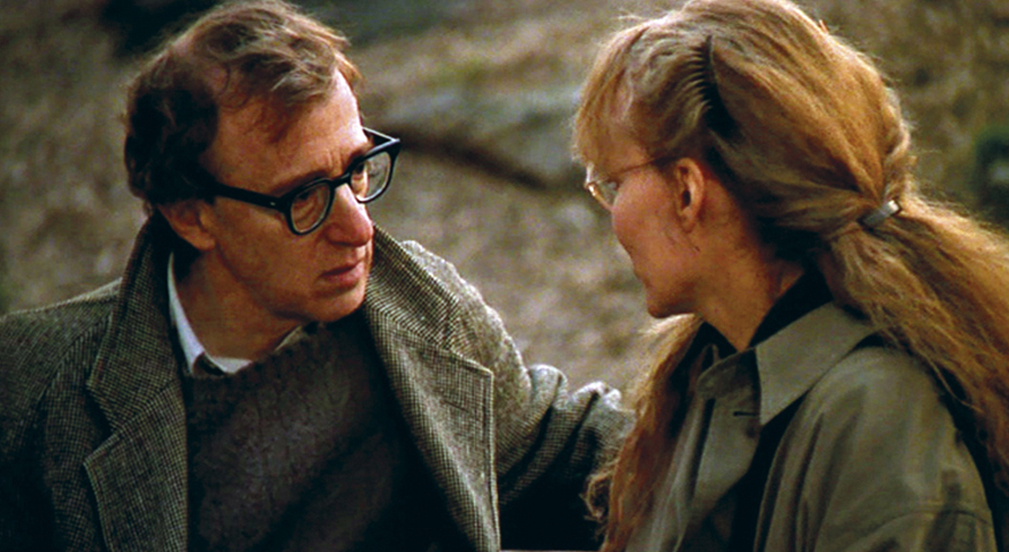